Stuart has enjoyed a successful career in music that has taken him to the Oscars, Queen Elizabeth’s Diamond Jubilee Celebration, BBC and several other notable performances. Everything started with the childlike strokes he practiced on his toy piano at the age of 3.

Stuart really believes in positively influencing lives through music. He appreciates music that involves and speaks to people with a purpose rather than music created for the sake of music. He has put this in action by working on areas such as corporate workshops, teaching, mentoring, governing and demonstrating artistic leadership.

At present, he is the Chairman of The London Youth Choir, the flagship choir of London. He has also been the Judge for BBC Choir of the Year and BBC Young Musician of the Year.

As soothing and inspiring his music is, he also has the sharp acumen for business and organizational skills. Music is inevitably in his veins and with the business knowledge joining hands, he is set to commit his career to the music industry. He is now fully immersed in reading for his MBA at Cambridge Judge Business School and will graduate during the second half of 2017.

It has been a common phenomenon to compare orchestra or group-music to business organizations or leadership. Having an in-depth exposure on the music side and now gaining a fresh understanding of the business side what have you got to say about this?

I have always been involved in the production side and leading music charities. So, I am quite used to being on both sides though not necessarily earning money on it. There are huge amounts of parallel.

Earlier in the conversation, we talked about the need for the composer to have a clear vision. So does a business leader.

How do you inspire yourself?

I seek to have an impact in everything I do. I like to be in roles where you need to wrestle with big decisions that will have a positive impact. It is the love of the thrill of the music. There is nothing like being surrounded with an orchestra and the sheer power of that. Not necessarily as a conductor, but also as an arranger /facilitator/producer.

It is not common to see MBA students with a musical background. How did you develop interest in studying for an MBA? What was your trigger?

In February 2016, I had a hand injury which put me in hospital for 2 weeks with 8 operations. I lost the use of tendon in my right thumb and the joint. Due to this, I retired from public conducting.

After this, I was confronted with the reality. I said to myself I have a portfolio of skills most of which are aimed at directing music, producing music, running charities etc. and how can I make the most out of this?

So, I was looking around and my neighbours friend was a Cambridge MBA who had done the culture, arts and media concentration. He (David Siebel) – who created the first national theatre live with the digital background which is an inspiring thing to do. Looking at him, I could see the value of an MBA.

My future will come more from organizing what other people do and so doing an MBA makes a lot of sense.

How do you think it benefits a person like you? 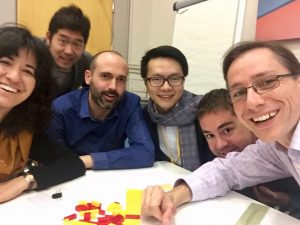 A spot of Lego team building with fellow Classmates

Firstly, I absorb a lot of information. It brings rigour to areas such as governance which I have done but do not know it inside out.

Secondly, the build-up of skills even though I might not need them now but will call upon them in the years to come.

It is the only MBA which had culture, arts and media concentration. Literally, never thought of going anywhere else because there will be no purpose in doing so. This was the place to go.

What has been your most memorable time in the MBA so far?

I like being an Ambassador and waving the flag on behalf of the organization. Some of the best times have happened outside Cambridge. I was at a creative entrepreneurs event in London and I managed to persuade Col Needham the man who invented IMDB (the online database for movies, television & video games) to come to Cambridge Judge Business School and give a talk. That was a real highlight.

What are the areas MBA is strengthening you in?

In fact, several areas – My finance knowledge, strategic thinking, sharpening my mind, rigorous analysis to see where things succeed/fail and why has it been so.

What career would you like to pursue after completing your MBA? Why?

The vision I had before I came on board the MBA is – in 5 to 10 years’ time, I want to run my own international arts & entertainment organization. Quiet what it will be, I do not know yet. But, this is my dream and goal.

What would be your advice to those who are considering doing an MBA from a musical background like yourself? 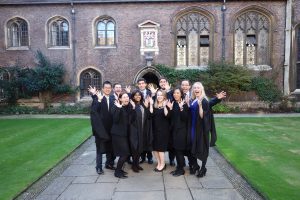 I also think the music industry is ahead of the curve here. MBA in creative industries is at a very early stage. Hence, MBA will become of increasing value as time goes forward. So if the artist is business aware it can only be an advantage.

Can art and business coexist without diminishing each other? What is to be done to make this happen?

Yes, of course, very much they can. Are we going to end up in a situation 40 years down the line where the back stage, support crew, management and marketing professionals of an orchestra are shrunk from 50 to 10?

If so, will it tip the balance much more towards the artists and much less to the management side of it. This could be a powerfully good thing to arts.

The best example is BBC Proms, the world’s largest classical music festival which is a festival not of established classical music but a festival of new music. Most frequently you have 6000 tickets sold out for the concert. You are using existing music to bring in an audience for new music, to challenge them and to come out really excited at the end of it. You are achieving everything here.

Latest posts by Globalmbacareer (see all)

Posted in:
Tagged with:

We have implemented the highest level of security which is represented by the green bar on your web browser which is typically used by banks/e-commerce companies for high secure transactions
Tweets by Globalmbacareer
Back to Top
Thanks for sharing. We love to connect with You. Join Us!
Follow @Globalmbacareer
Follow
Send this to a friend