Stuart has enjoyed a successful career in music that has taken him to the Oscars, Queen Elizabeth’s Diamond Jubilee Celebration, BBC and several other notable performances. Everything started with the childlike strokes he practiced on his toy piano at the age of 3.

Stuart really believes in positively influencing lives through music. He appreciates music that involves and speaks to people with a purpose rather than music created for the sake of music. He has put this in action by working on areas such as corporate workshops, teaching, mentoring, governing and demonstrating artistic leadership.

At present, he is the Chairman of The London Youth Choir, the flagship choir of London. He has also been the Judge for BBC Choir of the Year and BBC Young Musician of the Year.

As soothing and inspiring his music is, he also has the sharp acumen for business and organizational skills. Music is inevitably in his veins and with the business knowledge joining hands, he is set to commit his career to the music industry. He is now fully immersed in reading for his MBA at Cambridge Judge Business School and will graduate during the second half of 2017. 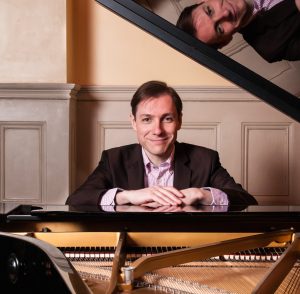 Why and how did you develop an interest in music?

My father was desperate to give up smoking, and finally kicked the habit by saving all his cigarette money for a year to buy a piano instead. I was aged 3 when this new “toy” arrived, and apparently started playing by picking out tunes from the radio, and the rest is history (and a lot of practice!).

At age 10, I went to The Purcell School, one of the UK’s 4 specialist music schools, and spent the next 8 years there in a very creative environment. Having developed a great interest in electronics, I went to Cambridge University on a choral scholarship, later changing to Music for my Bachelor’s degree. I then took an MPhil research degree there (Cambridge’s first research on popular music), and finally studied conducting and singing at the Royal College of Music for two years.

My love has always been the interface of classical and popular music. By the age of 16, I was conducting the local youth theatre in musicals from West Side Story to Guys and Dolls. Thus perhaps it was no surprise that I should later spend five years as musical director to one of the greatest popular music singers of the past century: Dame Shirley Bassey.

Can you tell us of a musician that has had the biggest impact on your life?

Conducting at the Royal Albert Hall with Shirley Bassey

Spending five years as conductor to Shirley Bassey was a huge honour and made a big impact upon how I work. With her, I was fortunate to conduct round the globe from the Oscars to Buckingham Palace and from Abbey Road to the BBC, with some of the world’s greatest orchestras. Events were always highly-pressured, as they frequently broadcast live to millions. Because of the artiste, I was able to apply uncompromisingly-high artistic standards: large orchestras and the finest soloists, all meticulously rehearsed.

She is an extraordinary woman to perform with, bringing over 60 years of experience into every phrase. Her energy, even in her late 70s was quite staggering. As she entered the stage, the crowd would go wild, and frequently stop the show: making us wait before we could continue! But it was when she opened up her voice to sing that made the biggest impact: like someone switching on a nuclear power station! She may have a reputation as a diva, but that is just based upon insistence of the finest music around her.

Indeed, possibly more than any other artiste I’ve ever worked with, she appreciates what good teamwork is all about. She also leaves nothing to chance: rehearsal is all about constant craftwork. Even songs that she’s performed hundreds of times were continually tweaked and polished: a subtle change of phrasing here, a new timing changed there. Very inspiring.

How do you view music?

Music speaks to us very deeply. Some anthropologists suggest humans sang before they spoke. This fascinates me because music can often produce emotional reactions quicker or more effectively than anything else. A great pop track makes you want to dance; and you feel a tingle in your spine as an orchestra reaches a climax.

You have conducted musical performances in various settings such as the Oscars, the Queen’s Diamond Jubilee Celebration, TV shows, Choirs and Orchestras in concert halls round the world. What have these collective experiences taught you? 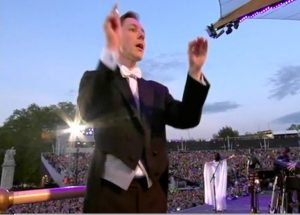 To love jeopardy! Having the pressure of live performance in front of millions of people sharpens the senses. I believe it’s the jeopardy that makes live performance so exciting. Artistes pre-recording and miming in front of audiences is just not for me. Who would want to go to a circus and see a tight-rope walker holding a handrail?

When I conducted for Shirley Bassey at the Oscars, we broke the mould and insisted on a 100% live performance. The producers may not have liked the risk involved, but for us that jeopardy is what made the performance so exciting. The press and audience certainly liked it: watch our performance on YouTube and judge for yourself!

How do you inspire and lead your musicians or choir?

You must have a very clear idea of how the music should sound. Of next importance is good teamwork. A conductor is the only person not actually making sound: our job is to enable others to make great music. To do that you don’t dictate: you enable a sense of guided autonomy. You listen to what they offer, and then mould it to make it better. Good musicians want to make music: your job is to allow them to do it, in a way that fits your vision. I feel that can be applied in any leadership sphere. Another key to success is surrounding yourself with the finest musicians!

You have designed and facilitated Corporate Singing Workshops for over 6 years. How do clients and participants benefit from such workshops? 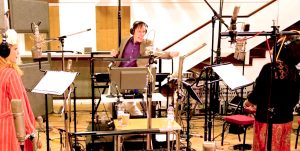 One of the things I used to do was organise and deliver choral singing workshop for big corporate clients. Working with McKinsey, I designed and delivered a 3-year project for telecom giant BT, working with their top 600 management. The idea was to build teams across different divisions by taking them outside of their comfort zones, and creating an environment where they could succeed against their expectations. In 90 minutes, I transform people who were terrified by singing in front of others into a choir singing in 9 parts, who went out dancing to the bar afterwards! I’ve also worked with EY, EE and even LOCOG (the 1,200 management of London’s 2012 Olympics). Key to the success of any project is designing an experience that is completely aligned with management’s needs.

The great thing about these workshops is that singing is a great leveller: nearly everyone’s a novice. It helps the participants to:

Latest posts by Globalmbacareer (see all)

Posted in:
Tagged with:

We have implemented the highest level of security which is represented by the green bar on your web browser which is typically used by banks/e-commerce companies for high secure transactions
Tweets by Globalmbacareer
Back to Top
Thanks for sharing. We love to connect with You. Join Us!
Follow @Globalmbacareer
Follow
Send this to a friend